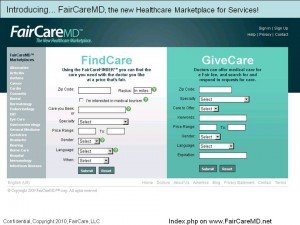 Not every new idea in healthcare works. FairCareMD.com, our attempt to bring fair pricing to healthcare, has finally gone dark for the last time. After we tried to crowdfund it and failed we knew the end was near. It is telling that it’s best traffic days were when it was mentioned as part of the origin story for MedStartr. But I loved the idea too much to let it go gently into the night and asked my friend and collaborator Jacek Zagorski of Shasta Networks to keep it going on his servers. But now we have finally pulled the plug.  It is sad, but necessary. It wasn’t doing anyone any good anymore and needed too much work that we could no longer afford to do. Fact is, we only have time for one massively disruptive crazy idea at a time. Maybe we will pick it up again someday or rebuild it, but for now you are on your own when finding fair prices for medical care.  The good news is that there are many new resources and the success of Obamacare has made reasonably priced health insurance a viable option in many states.  I’m not saying the price transparency problem is solved, far from it, but well funded teams led by really smart people are working on the problem and they have a good chance of success.  We wish them the best of luck.

If there is one lesson I have learned from the experience it is to never invest in an idea before you get a crowd willing to pay for the product or service.  I walked around New York for 100 days and got 100 doctors to sign up for FairCareMD before we built the site.  While this sounds like it was a great way to design a site that doctors would love, the key element missing was that I never made anyone pay for it and what is given for free is not valued.  More importantly, the fact that I could not even give it away or get many people to agree to pay showed the original model needed work.  This is one of the reasons I find the “Crowd Test Before you Invest” approach so compelling.  On MedStartr we have helped over 80 new ideas get to market.  They have gone on to raise over 50 million dollars and obtains thousands of paying customers and hundreds of partners.  FairCareMD, by contrast, was our first project.  It has had over 30,000 views and only six people funded it, by far our worst project stats ever.  If you can’t get people to pay for your idea before you build it, then you should not build it.  Period.

Another lesson, well summarized by my better half, is “never name a company after yourself.”  Fact is I loved the idea too much and perhaps putting my name on it was part of that.  Sometimes you need to let an idea go.  You get too close to it and can’t see the blemishes or just stubbornly won’t change important aspects.  This also happened here.

A third and final take away is that you only get so many chances, so make them count.  We actually know what should be built next and why it will work whereas other approaches did not.  We just don’t have the time or resources to build it out properly. That is what we went to go crowdfund in 2012 that lead to the creation of MedStartr.  But everyone funded MedStartr and no one funded FairCare, so we listened and kept building MedStartr – what the late great Bob Ross would have called a “happy accident.”  Still, by our third iteration of FairCareMD we had burnt through our capital and runway and that is no way to start a next iteration.  MedStartr, by comparison, was generating self sustaining revenue from day -30 and profitable on the second day after incorporation (see lesson 1.)

What’s next for FairCare?  For now it is mothballed.  We may open source the code or license it if anyone is interested, but otherwise it is just an interesting footnote in our history here at MedStartr.  If you want to do something with it please make us an offer by emailing us here.

Thank you to everyone who helped on the FairCareMD project.  Mike Pence, Jeremy Senn, Jacek Zagorski, Adam Whittaker, Howard Luks, Sunnie Southern, and many more.  We gave it our best shot and your help was greatly appreciated.